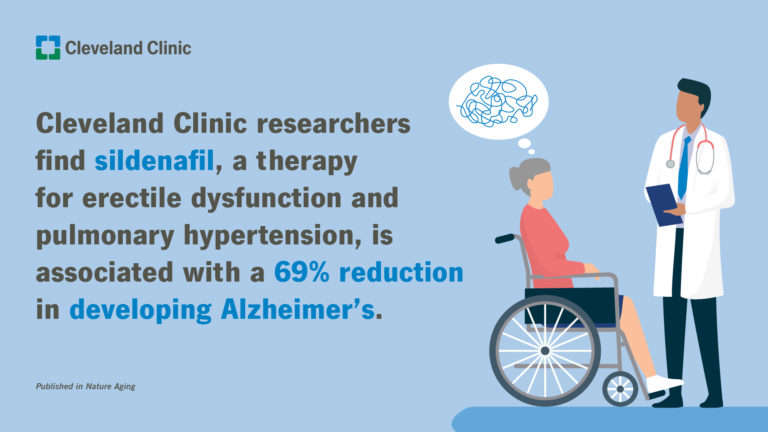 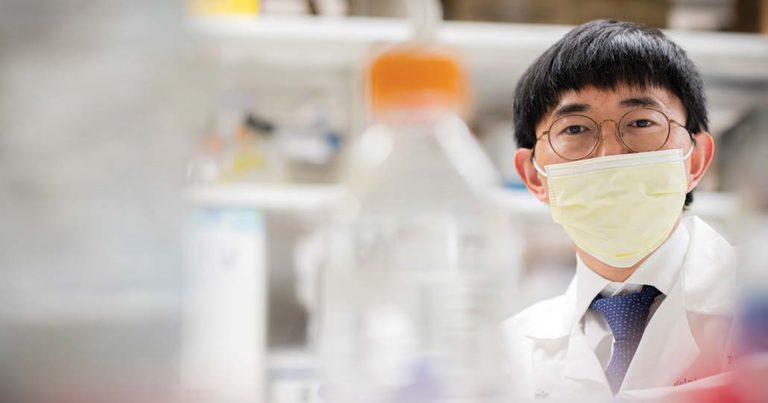 According to findings published in Nature Aging, the research team, led by Feixiong Cheng, Ph.D., of Cleveland Clinic’s Genomic Medicine Institute, used computational methodology to screen and validate FDA-approved drugs as potential therapies for Alzheimer’s disease. Through a large-scale analysis of a database of more than 7 million patients, they determined that sildenafil is associated with 69% reduced incidence of Alzheimer’s disease, indicating the need for follow-up clinical trial testing of the drug’s efficacy in patients with the disease.

Without the development of effective new treatments, Alzheimer’s disease is set to impact 13.8 million Americans by 2050, underscoring the need for rapid development of prevention and treatment strategies. Drug repurposing – use of an existing drug for new therapeutic purposes – offers a practical alternative to the costly and time-consuming traditional drug discovery process.

“This paper is an example of a growing area of research in precision medicine where big data is key to connecting the dots between existing drugs and a complex disease like Alzheimer’s,” said Jean Yuan, M.D., Ph.D., program director of Translational Bioinformatics and Drug Development at the National Institute on Aging (NIA), part of the National Institutes of Health (NIH), which funded this research. “This is one of many efforts we are supporting to find existing drugs or available safe compounds for other conditions that would be good candidates for Alzheimer’s disease clinical trials.”

Dr. Cheng’s team has found that understanding subtypes (endophenotypes) of neurodegenerative diseases such as Alzheimer’s disease may help to reveal common underlying mechanisms and lead to discovery of actionable targets for drug repurposing.

The buildup of beta amyloid and tau proteins in the brain leads to amyloid plaques and tau neurofibrillary tangles – two hallmarks of Alzheimer’s-related brain changes. The amount and location of these proteins in the brain may help define endophenotypes. However, no FDA-approved, anti-amyloid or anti-tau small molecule Alzheimer’s treatments currently exist, with many clinical trials for such treatments having failed in the past decade.

“Recent studies show that the interplay between amyloid and tau is a greater contributor to Alzheimer’s than either by itself,” said Dr. Cheng. “Therefore, we hypothesized that drugs targeting the molecular network intersection of amyloid and tau endophenotypes should have the greatest potential for success.”

Using a large gene-mapping network, researchers integrated genetic and other biologic data to determine which of over 1,600 FDA-approved drugs could be an effective treatment for Alzheimer’s disease. They pinpointed drugs that target both amyloid and tau as having higher scores compared to drugs that target just one or the other. “Sildenafil, which has been shown to significantly improve cognition and memory in preclinical models, presented as the best drug candidate,” said Dr. Cheng.

The research team utilized a large database of claims data of more than 7 million people in the U.S. to examine the relationship between sildenafil and Alzheimer’s disease outcomes by comparing sildenafil users to non-users. The analysis included patients using comparator drugs that either were in an active Alzheimer’s clinical trial (losartan or metformin) or were not yet reported as relevant to the disease (diltiazem or glimepiride).

“Notably, we found that sildenafil use reduced the likelihood of Alzheimer’s in individuals with coronary artery disease, hypertension and type 2 diabetes, all of which are comorbidities significantly associated with risk of the disease, as well as in those without,” added Dr. Cheng.

“Because our findings only establish an association between sildenafil use and reduced incidence of Alzheimer’s disease, we are now planning a mechanistic trial and a phase II randomized clinical trial to test causality and confirm sildenafil’s clinical benefits for Alzheimer’s patients,” said Dr. Cheng. “We also foresee our approach being applied to other neurodegenerative diseases, including Parkinson’s disease and amyotrophic lateral sclerosis, to accelerate the drug discovery process.”

About Cleveland Clinic
Cleveland Clinic – now in its centennial year – is a nonprofit multispecialty academic medical center that integrates clinical and hospital care with research and education. Located in Cleveland, Ohio, it was founded in 1921 by four renowned physicians with a vision of providing outstanding patient care based upon the principles of cooperation, compassion and innovation. Cleveland Clinic has pioneered many medical breakthroughs, including coronary artery bypass surgery and the first face transplant in the United States. U.S. News & World Report consistently names Cleveland Clinic as one of the nation’s best hospitals in its annual “America’s Best Hospitals” survey. Among Cleveland Clinic’s 70,800 employees worldwide are more than 4,660 salaried physicians and researchers, and 18,500 registered nurses and advanced practice providers, representing 140 medical specialties and subspecialties. Cleveland Clinic is a 6,500-bed health system that includes a 173-acre main campus near downtown Cleveland, 19 hospitals, more than 220 outpatient facilities, and locations in southeast Florida; Las Vegas, Nevada; Toronto, Canada; Abu Dhabi, UAE; and London, England. In 2020, there were 8.7 million total outpatient visits, 273,000 hospital admissions and observations, and 217,000 surgical cases throughout Cleveland Clinic’s health system. Patients came for treatment from every state and 185 countries. Visit us at clevelandclinic.org. Follow us at twitter.com/ClevelandClinic. News and resources available at newsroom.clevelandclinic.org.

Cleveland Clinic Research Shows Drug in Viagra Reduced Likelihood of Developing Alzheimer’s By 69% added by admin on December 7, 2021
View all posts by admin →